Moodswings in the Darklands 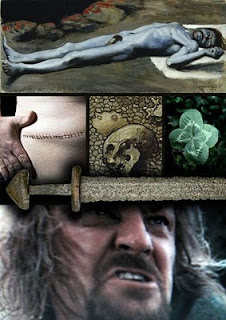 Working with the Moodboard at the moment....Just picked some cool images that i liked. 'had this wicked idea, to tell the story of the Lemminkäinen with the moodboard.
-Mikko
Mikko Luoma at 18:46 1 comment:
Share

Now it's time to tell you about my thoughts, my future plans and projects.
But first, i got to tell you about the fact, that I'v been receiving lots of positive feedback lately, from many people that i highly respect and honour, people, Who's work had inspired me to start my own experiments in the first place.
That have gave me lots of extra energy to work my way forwards from project to project. So thank you all for your support!!!

I'v been reading a lot lately..and there's a reason for that. For a couple of months now, i have planning my next miniature project. I wanted to make something unique and something that had not been done before. I also wanted it to somehow express the way i see the world, as miniature artist. So i turned to our Finnish national epic The Kalevala

From that book, i found my character. I found The Tragic Hero Ahti Lemminkäinen.
Lemminkäinen was a wanton hero, that loved women and war! It is a long story to tell, but in one ocasion Lemminkäinen got killed By the Demons of Tuonela (realm of the dead) who hacked him into pieces and threw the pieces in to the River Of The Dead. In the end, Lemminkäinen's mother bringed him back by sewing the pieces together and by casting powerfull spells to awoke her son back to life.

So Lemminkäinen appeared to be a perfect choice for me!

The Actuall project is in very early stages now, but i have started it anyway.
This is what i got at the moment:

The Kalevala I have red the Kalevala in Finnish already, but i bought an English version because i have always wanted to read it in English too, so now i had my chance, plus it is easier fo my to write this blog when i can refer to the book.


Here is a Stunning painting by Akseli Gallen Kallela


"The Painting is depicting a scene from Kalevala. The warrior Lemminkainen had been killed, his body hacked to pieces and thrown into the dark river that flows through the underworld, Tuonela. His mother, having collected the parts from the river and sewing them back together, looks up to see a single bee bringing back honey from the halls of the god Ukko, a wondrous ointment that would bring her son to life." 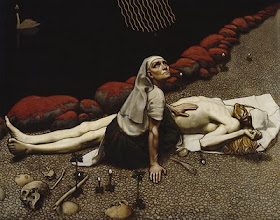 This Painting really has the MOOD, that i want to bring into my version too.

My goal is to make MY own Version of the Hero, i will probably add some elements from the modern Fantasy into the mix. I am great fan of Michael Moorcook's Elric Saga and i think i want to include some of the Elric's looks into my Tragic Hero also

Here is Elric as painted by Frank Brunner: 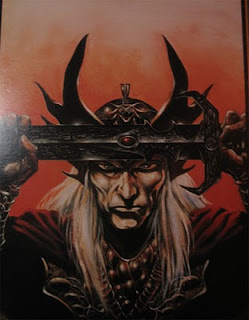 I 'm sure that this thing will grow in to epic proportions and would not be just another miniature project but something i need to do, to understand my own motives as an miniature designer and artist. 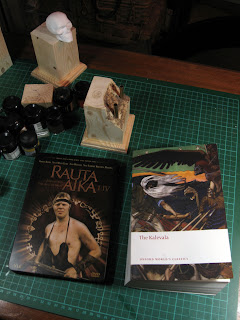 So, for now on, i will be posting my thoughts and hopefully some skecthes too in the near future.

Finally it's done! The Renegade "Captain Gaga" is now sculpted and ready for painting.

Sculpting her, was one hell of a emotional rollercoaster really! At first, i had major broblems, in getting the proportions right. I started sculpting the figure four times before getting it anywhere near the right direction. After that, there has been dozens of occasions, when i would have longed to just give up and throw the model outta' nearest window!!

Female figures are probably the hardest ones to get right and i took huge challence when i chose to do Captain Gaga. Eventually, i fought my way trough the hard times and got out as a winner =)

The model is not anywhere near perfect, nor it never tried to be such thing, but looking it now, i must say that i am satisfied with the outcome. I can honestly say, that this was my "babtism of fire" in figure sculpting.

I started with solid idea, i then sketched it properly down before i moved into actual Sculpting of the model. Then i tried to follow that plan and finished the model. When i now compare the original sketch and the newly finished product, i am pretty satisfied with the result. 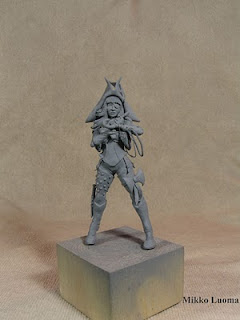 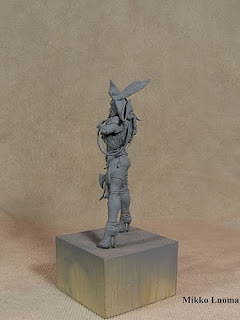 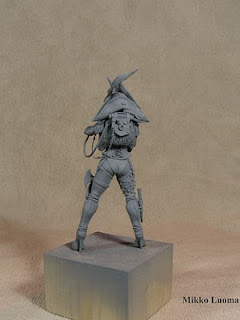 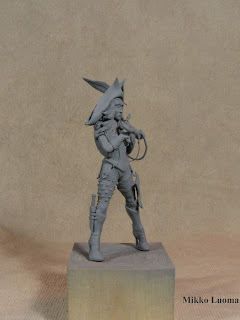 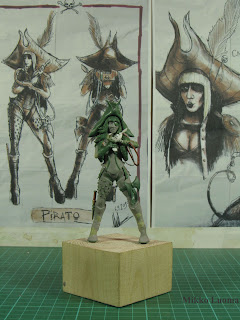 Little birds just whispered to me that okkiW's Space Pirato Captain Gaga is ready, at least the sculpt is. I just saw couple of photos from her and I must say, it's just pure amazing! ... Eh, by the way, has anyone seen my jaw? It just fell off! Please let me know if you see it, cheers!
Kari Hernesniemi at 21:02 1 comment:
Share
‹
›
Home
View web version