The Fighting Brotherhood Of The Lost League

Squats, the first time I saw Squats was not in the Rogue Trader (too young for that really) but in the rulebook of the 2. edition of the game. Once again it was the John Blanche artwork that drew my attention…


Just brilliant! I wanted to field a Squat army!! but, wait!!!,,, even though the rulebook (& Codex Imperialis) displayed them as one of the major races of the 40k universe, in the reality they were already wiped out from the system (as I later bitterly found out). Bummer!!!

During the years I have played with the idea of resurrecting this race back to battlefields but since so far there haven't really been good miniatures to convert them from! Until very recently… (although Johan has done very inspiring conversion before me here)

I was browsing through GW's site and there they were! Dwarf Iron Breakers!!! seriously perfect candidates for my long time dream of fielding a army of these stunty diehards!

Iron Breaker bodies and heads combined with hands, guns and accessories from Space Marine Scouts All very simple and all very effective! and easy too!!!

So one test-mini turned into a squad and now Im aiming for a small battle force to play with my mates at work (yes, we have active WH-gaming group there!). Im thinking of using Space Marine or maybe even Space Wolves rules for them, so at least another tactical squad and a command squad… and a Ancestor (dreadnought) then few Trikes (attack bikes) and Hearthguard (terminators) and…. you get the point.

OK I got to admit that this all started as a joke, a bit of fun to got my attention back to painting miniatures again, but as soon as I started I realized that this was lot more than a joke. So the story of the Lost League started to evolve… 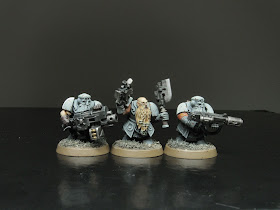 Very simple paint job - airbrush for the blueish-grey base coat (Tamiya paints) and GW paints for the rest. I was tempted to paint the bolter casings red just for the old times sake, but then I thought that the Squats are retro enough alone so I went for the black. I painted the sleeves orange to give some colour and it actually works pretty well with the highly restricted palette.

Added some color to the bolter casings!