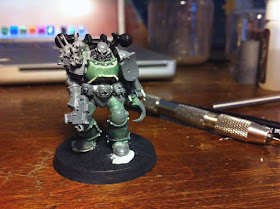 Phew, just finished with the Corsair's armour trims and studds. I decided to keep the trims very simple and less ornamental - like if I had the skills to make them that ornamental at this point. I'll leave it to the painting state to really bring those flat areas alive. Got to say, gluing those tiny studds (cut off from dish brush hair) wasn't really the best bit of this project...

And here's a close-up from the trophy skulls pierced by the shoulder pads spikes (Sorry Molotov, majority spoke and I decided to keep the skulls). Like JB suggested, I will paint something catchy on the other shoulder's shield to balance the upper body. Also, the massive fur mantle that I've planned to "frame" the Astartes will make the trophy skulls pad look lot smaller.

And finally a peek to behind. This area will probably be mostly covered by a massive fur mantle that'll trail behind the Corsair. 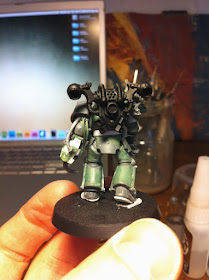 If everything goes well, the Corsair is well on its way to be finished before the end of the month. I was thinking of expanding this project a bit, giving the Renegade Astartes a small companion, a helmet carrier on a seperate base, to make the massive character look even bigger.