Hi folks! Here's my latest creation, Lady Inquisitor of Ordo Xenos. I introduced this project to you in one of my previous posts in a form of a sketch, but after that I kept the process pretty much in the dark.

Here she now stands, proud and noble, armed to teeth with Xenos weapons of different origin, in her well-travelled and battle worn dress and tight corset-like body glove armour. She carries a small power generator on her back which is connected to a strange weapon of two tentacle-like needles. Capsules of different size and shape, filled liquids and poisons of different sort, stick out of her back like dark flowers. Her head is shaven (something nobles of her kind might do to show off their caste in where she comes from). She's very self-assured and knows what she wants. You can only guess what her entourage would look like... 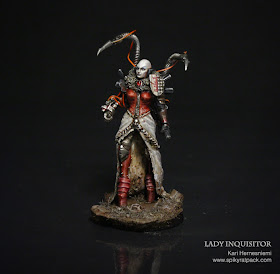 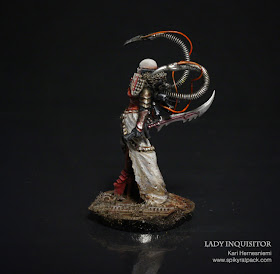 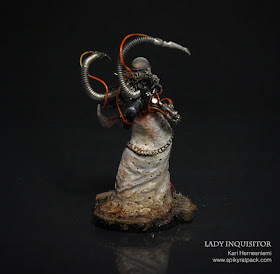 It took me good three months to finish her. I kept pushing the project forward with small but sure steps, putting an hour in to it every now and then. The process wasn't all sing and sunshine as I did have some set-backs on the road. Just when I had one piece ready and sculpted, the other parts looked odd or off-place. I had to sculpt the dress twice as I wasn't satisfied by the way it looked like. It was way too light build and was sculpted to look too rough and unnatural.

She also had her head swapped once. The first one was Slaaneshi Daemonette's but I didn't like it that much so decided to get one from the Dark Elf Sorceress. The new head was much better, more femine. But there was a new problem to be solved; her mouth. The original head had it's mouth wide open, like if she was roaring out some loud commands or something. It really didn't fit in as her body language spoke very much different language – very static and noble. So to solve this new problem I had to cut off her jaw and re-sculpt the whole lower part of her head, to make her look more like in the sketch. No easy task for me as I'm used to sculpt ugly men with rough shapes. But I think I managed to pull it off.

Her colours – as so often in my case – are very much in the style of Blanchitsu; reds, oranges and dirty white. She actually blends in the Rogues Malus and could very well be one of them. I gave an extra effort to her face as I wanted it to be perfect. Painted the damn eyes three times to make them look the way I wanted to – piercing and precise! When the head piece was done, the rest of the painting went like clockwork.

Hope you like the outcome as much I liked making the piece! Now it is time to look for a suitable package for her to make her journey to Spain safe... Adiós!