The Brotherhood of Steel

My Squat force has now reached the point where I have managed to get the troop choices ready and painted. As you all surely know, this is also the most boring part when new army is started. Row after row of foot soldiers who all look very much alike. I have proceeded with great speed and it has been a great fun all the way!

But before I start converting any more miniatures, I must first just sit back and start to work on the background story for these guys.

Where do they come from? How did they managed to avoid from the fate that met their brothers?? To who they hold they grudge now??? Lots of questions that need answering…

The great thing about army projects is the fact that they last for long periods of time. After every new character / squad there should be enough time to really think that what needs to be added next. I don't want to rush things and I need to check all the newly released plastic kits for good parts etc... 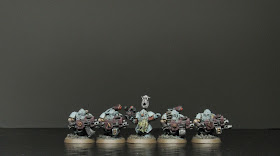 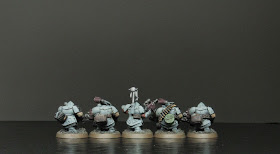